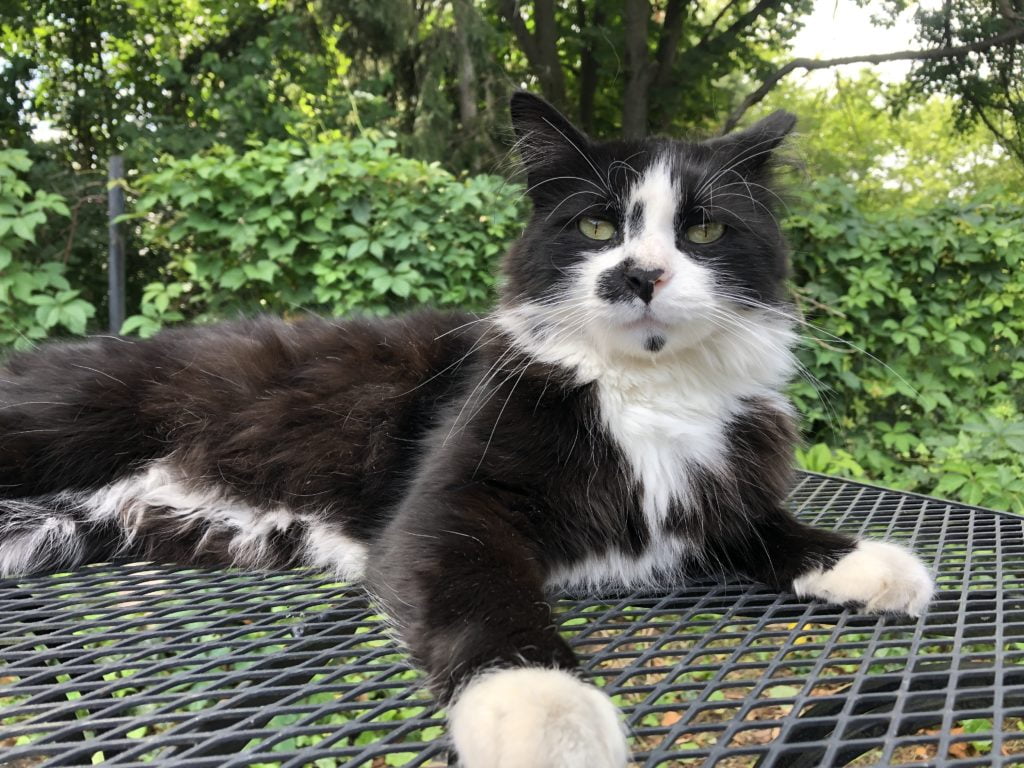 You know him and you love him (maybe even as much as we do!). You see him in our studio, on our social and even on our website but what’s his story? Cat Jack White has been an important part of our studio since 2018. With a special release going out to our newsletter subscribers today (want to know what it is?? Subscribe here!), we thought it was the perfect time to share this feline’s unique origin story. Keep reading to see how Jack went from a street cat to living in our studio!

At the beginning of 2018, a pretty tabby, very pregnant, came to our backdoor. We left her food and she started coming back everyday. Time passed and one day she came by with a handsome tuxedo cat and four kittens. They come for the kibble but wouldn’t let us get near them. It was a long time building trust, especially after we trapped them all and had them neutered and spayed. But we persisted and over the years they adopted us.

They were all very feral, super skittish and wouldn’t let us get too close. But the handsome tuxedo cat was different. Each day we’d leave the studio door open and bring the food bowl farther and farther inside and he would sneak in a little bit at a time. Then, one day, he let us pet him, just a little. Another day he played with a toy on a string. Finally we earned his trust! He let us pick him up. Winter was on the way and he started to spend the nights inside.

Of course he needed a name. After much deliberation (Mr. Fuzzy Face? Professor Purrington?), we settled on Cat Jack White. His girlfriend became MK, short for Mama Kitty.

MK and Jack’s litter was made up of two girl kittens and two boy kittens. The two boy kittens looked like twins, it was almost impossible to tell them apart so we named them Ronnie and Reggie (after the Kray twins of course). Unfortunately, they both succumbed to the hard life of feral kitties as did one of the girl kitties who we had named PP, almost breaking our hearts. The other kitten, the smartest, Arya, lives at the neighbors house. But then low and behold, Jack’s sister showed up and she is the spitting image of PP so we named her Winston, Winnie for short (after the cat in Pet Sematary). Yes, yes, we know, we have a twisted sense of humor.

Since Cat Jack White has been around, we’ve shared him with you on social media and he’s garnered a cult following! People love to see him in our posts and love visiting him in the studio.

He’s had people drive from across the state to visit him. Guests have brought him presents. People ask to have pictures with him. He’s become a superstar! He still hasn’t met his namesake, the human Jack White, but we’ve had a few guests say they would let him know about the cat with his name… so maybe one day!

Jack loves it here in the studio. He has food, water, a warm place to sleep, cat nip, and toys. And his best friend Devi. Devi is the little grey kitty that lives in the studio with Jack. She was found by our intern about a year after Jack moved in. The two of them are either like two peas in a pod or fighting… like cats.

It’s not really expected to have cats in a glassblowing studio. There’s fire, a 2000 degree furnace and glass… lots of glass. But they don’t break anything, they use the litter boxes, and they light up our lives. 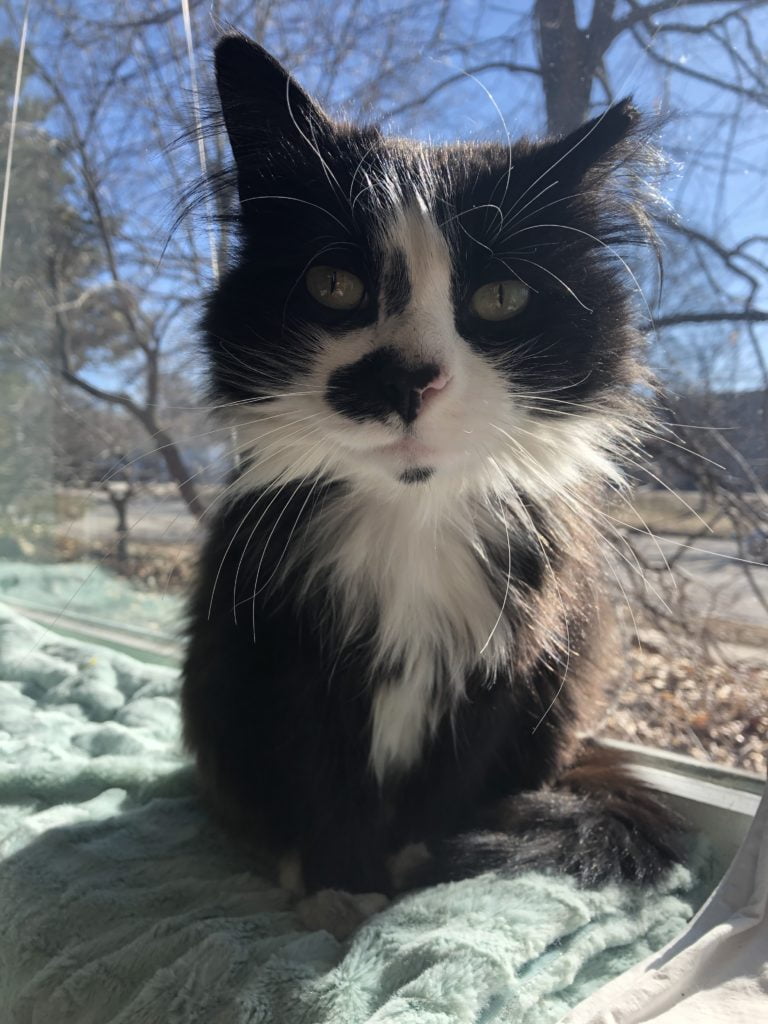 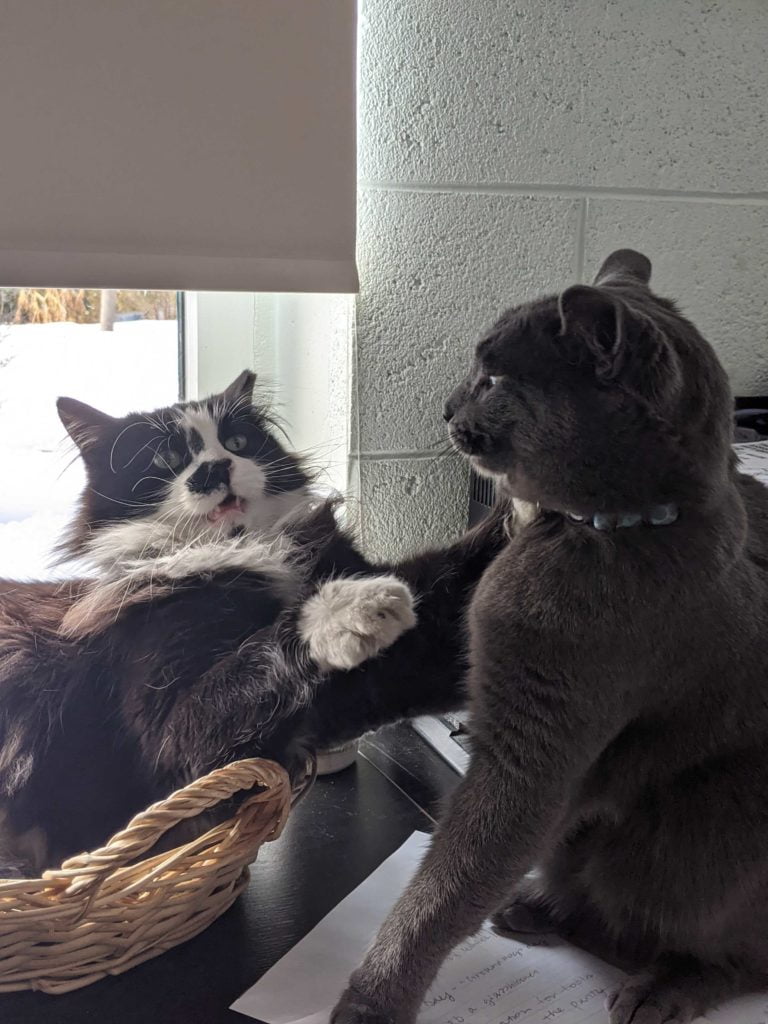 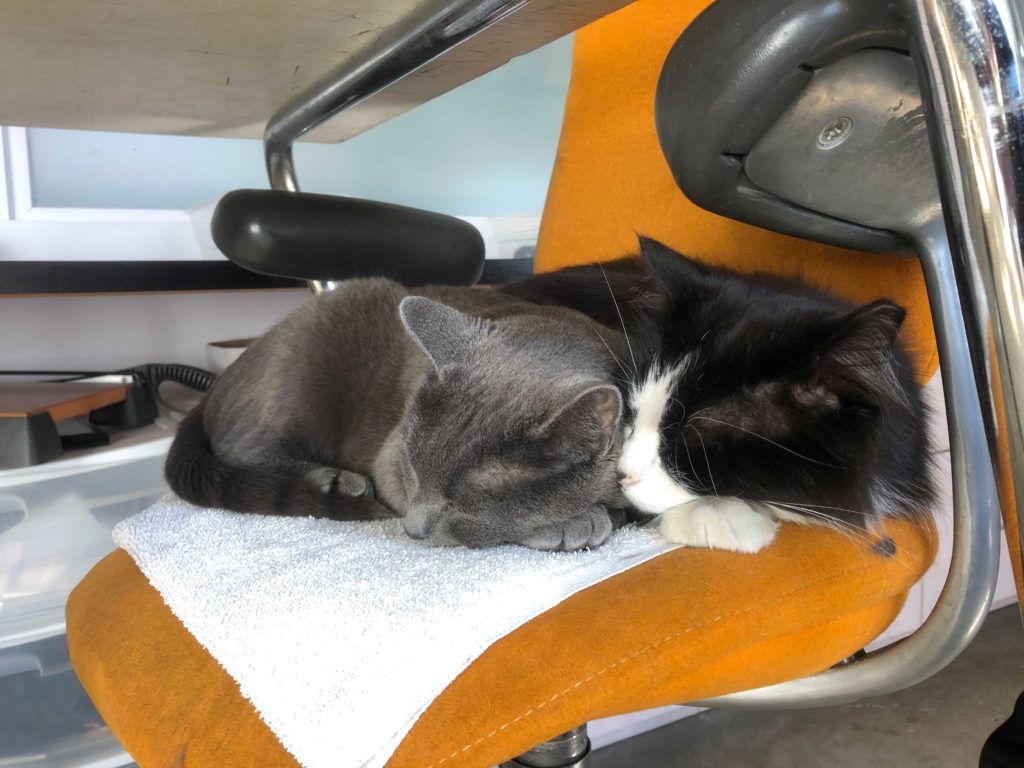 We can’t write an entire blog about our cats without mentioning our partnership with Michigan Humane. A portion of the proceeds from our animal themed art (including the piece newsletter subscribers can buy today!) goes to benefit this amazing animal welfare organization. You can read all about it in this blog post. And don’t forget to visit our webstore to get your own Sleeping Kitties or Birds of Beauty!

We hope you enjoyed this look at how Cat Jack White came to be part of our studio family. And we hope you’ll stop by to visit him sometime! We’re open every Saturday from 10am – 3pm and we just opened registration for our April workshops here. 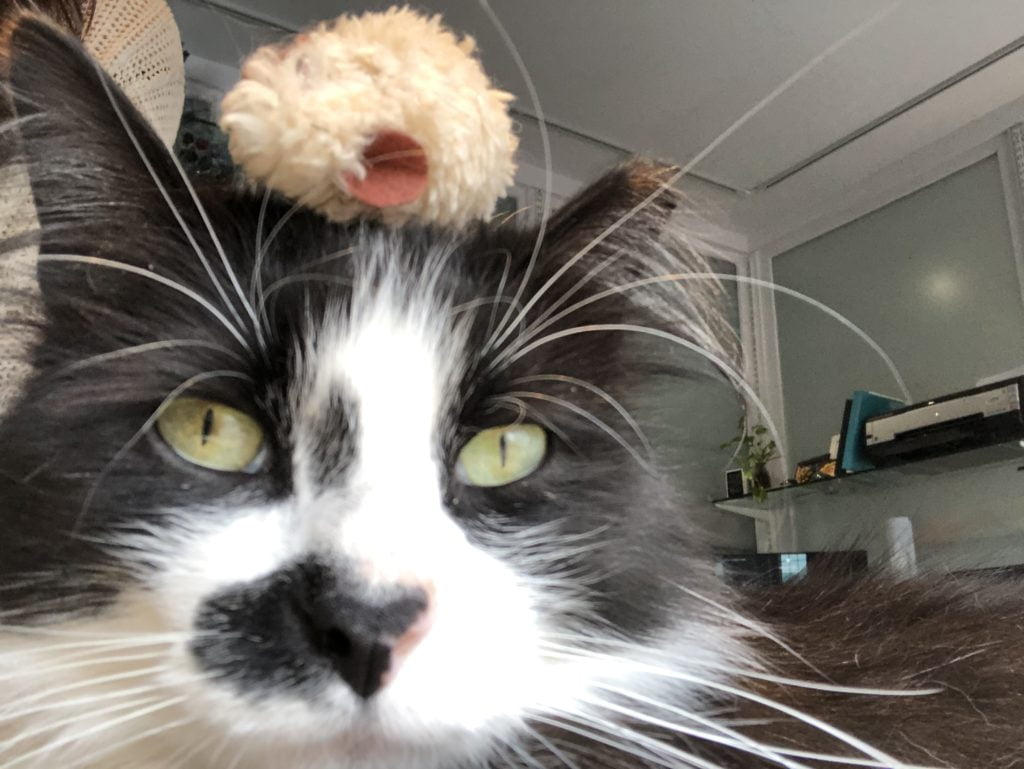 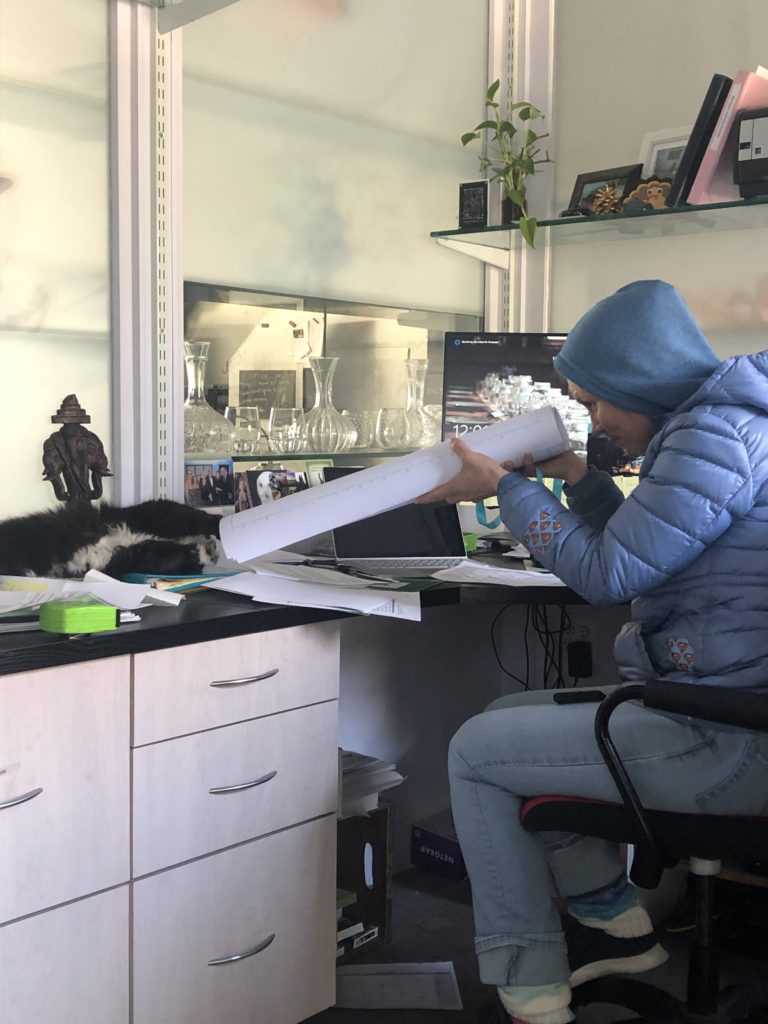 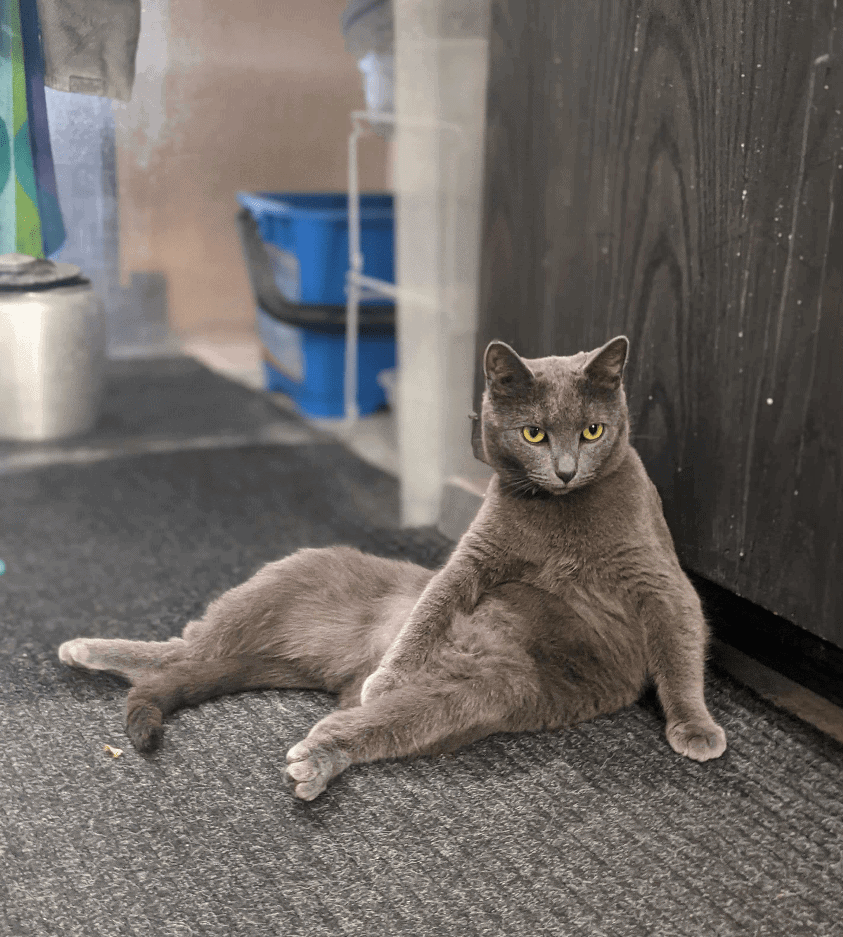 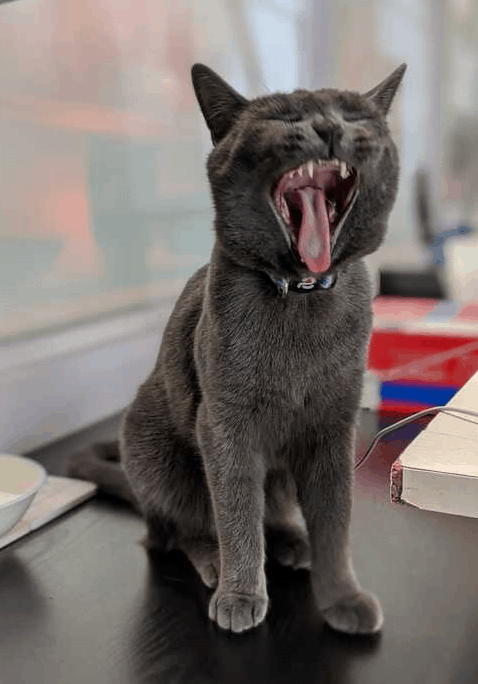 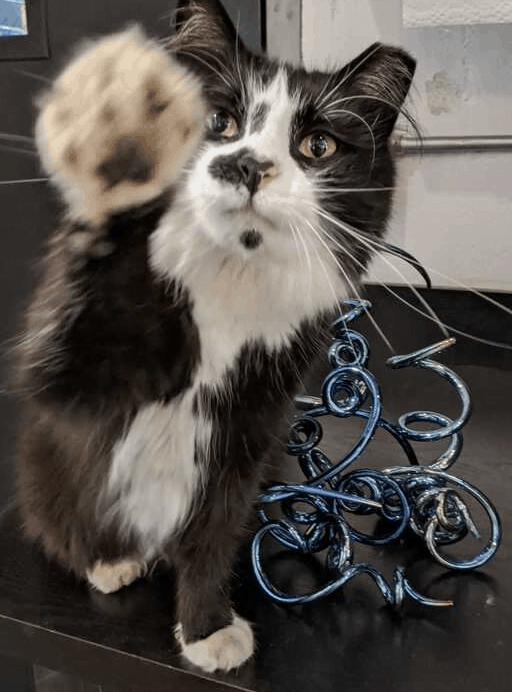 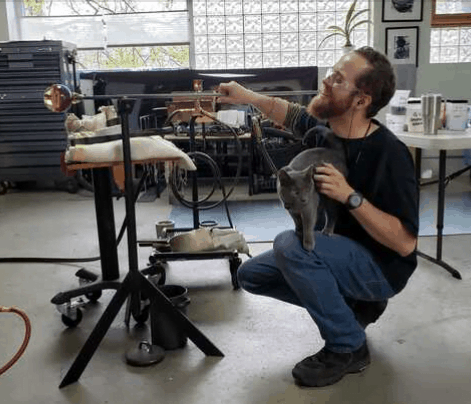 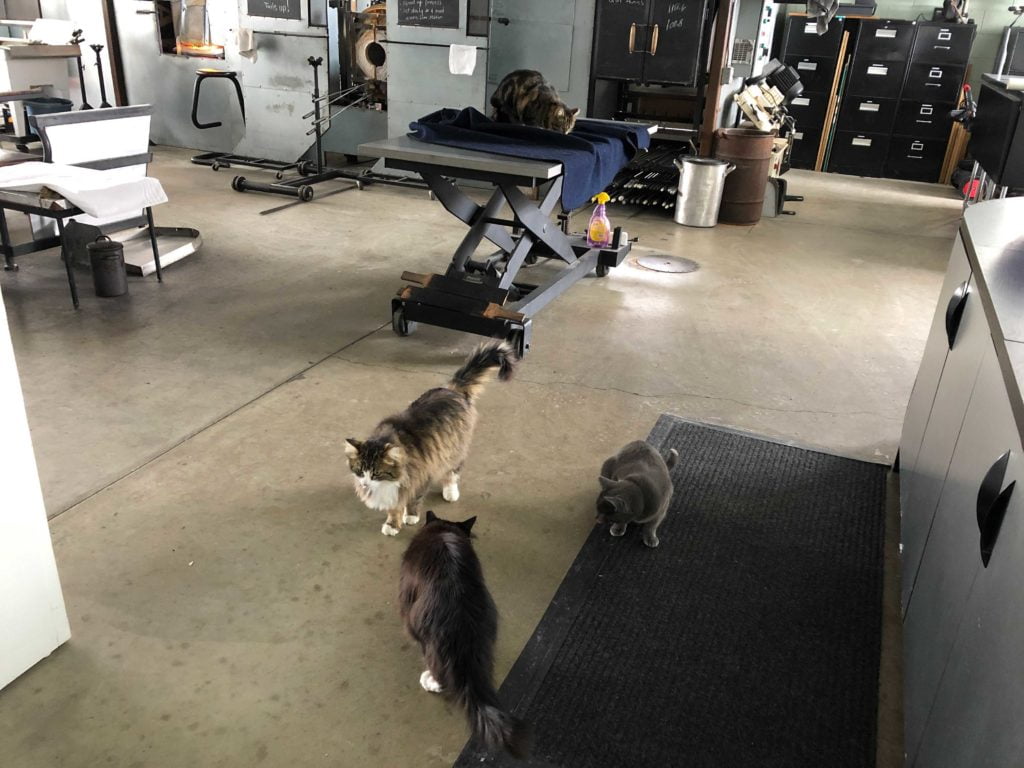 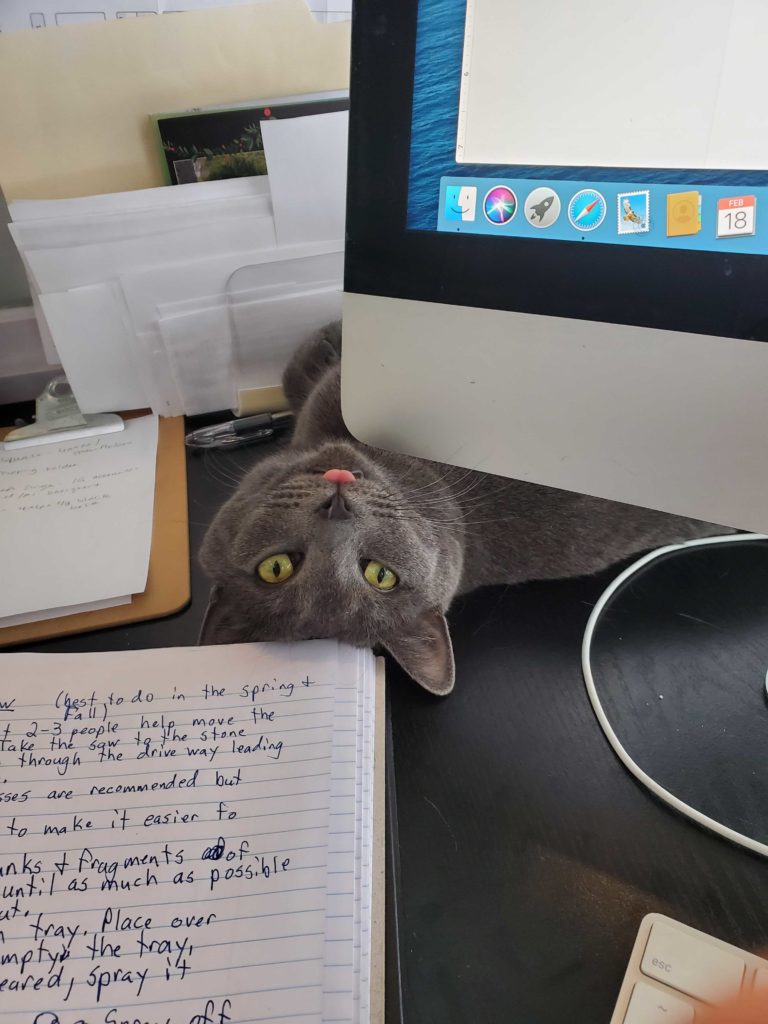 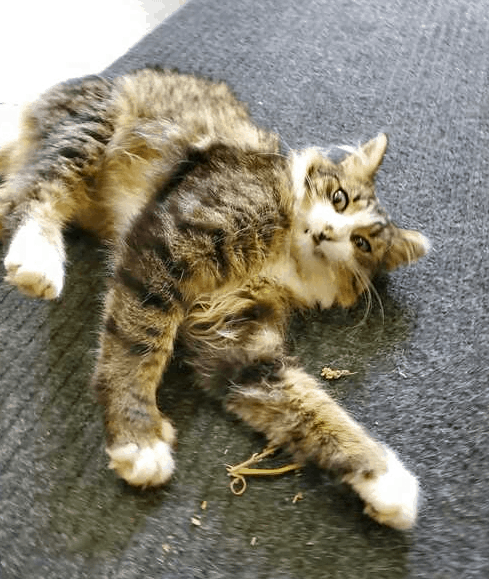 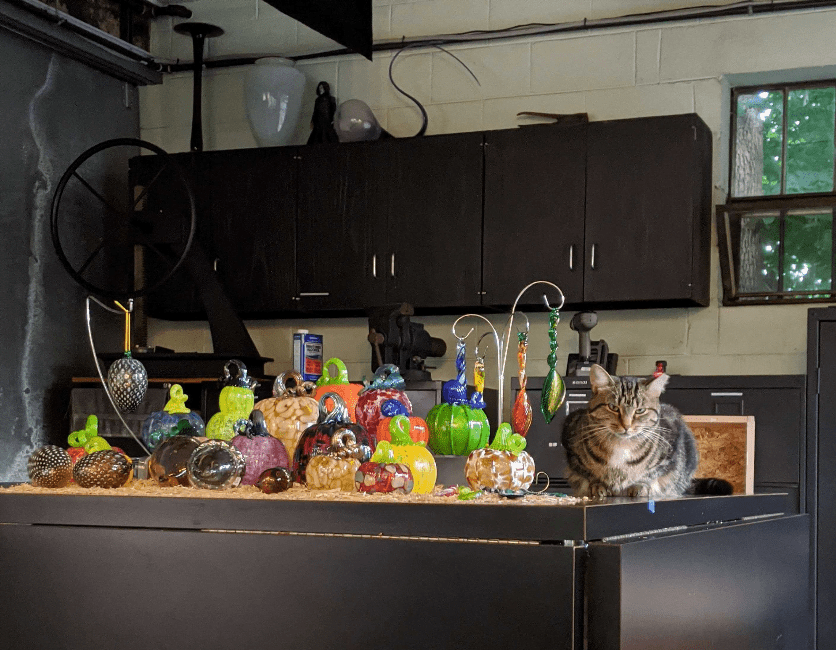 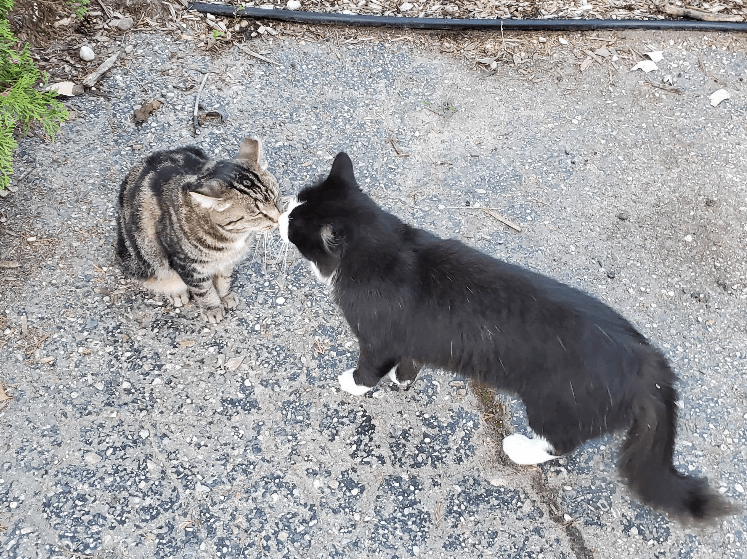 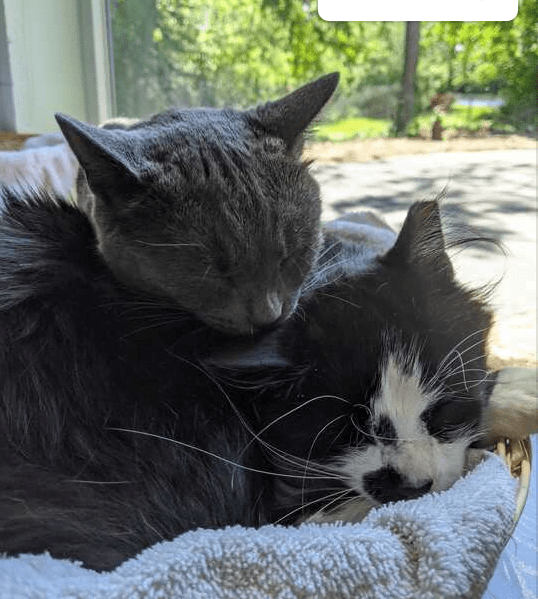 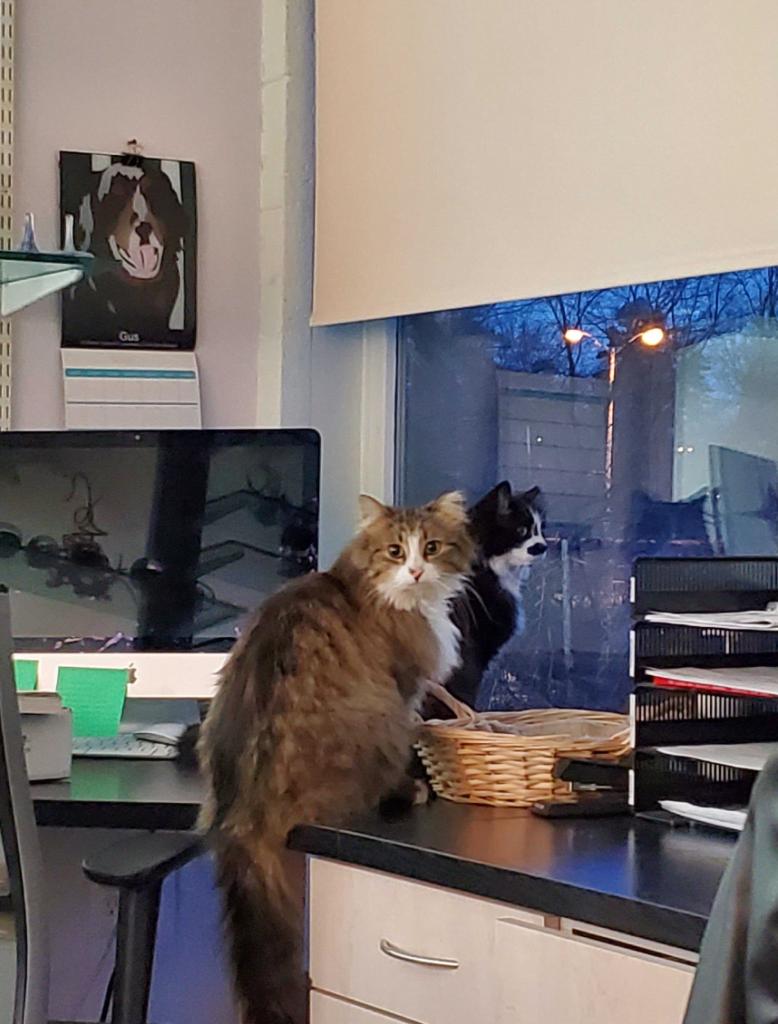 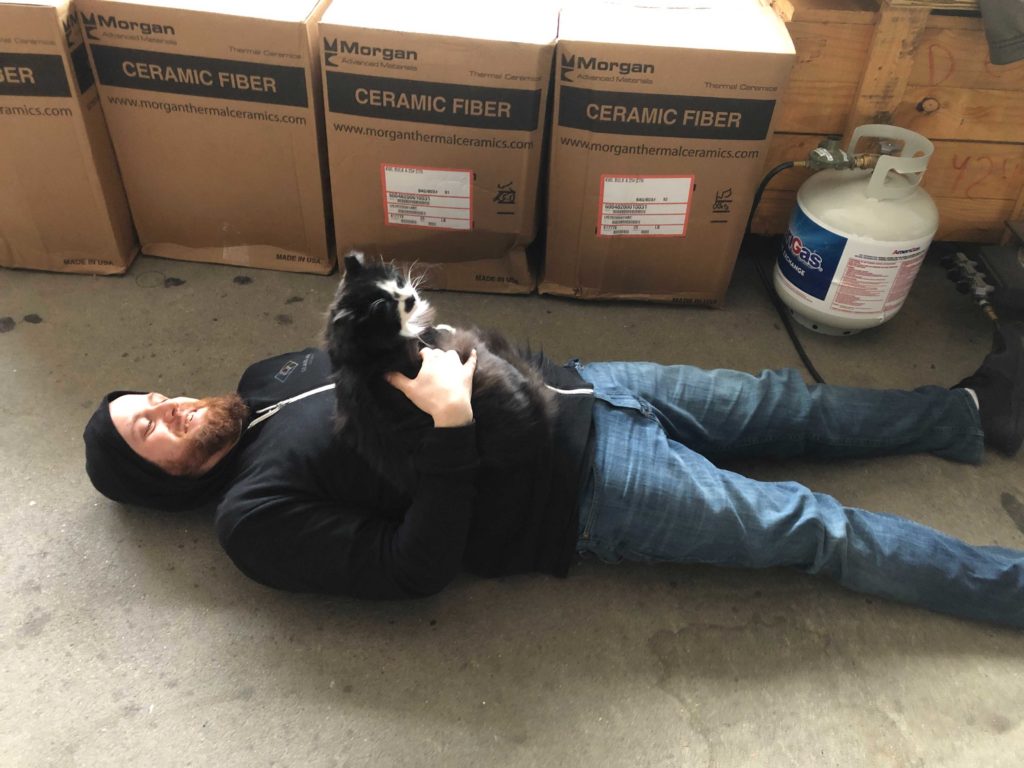 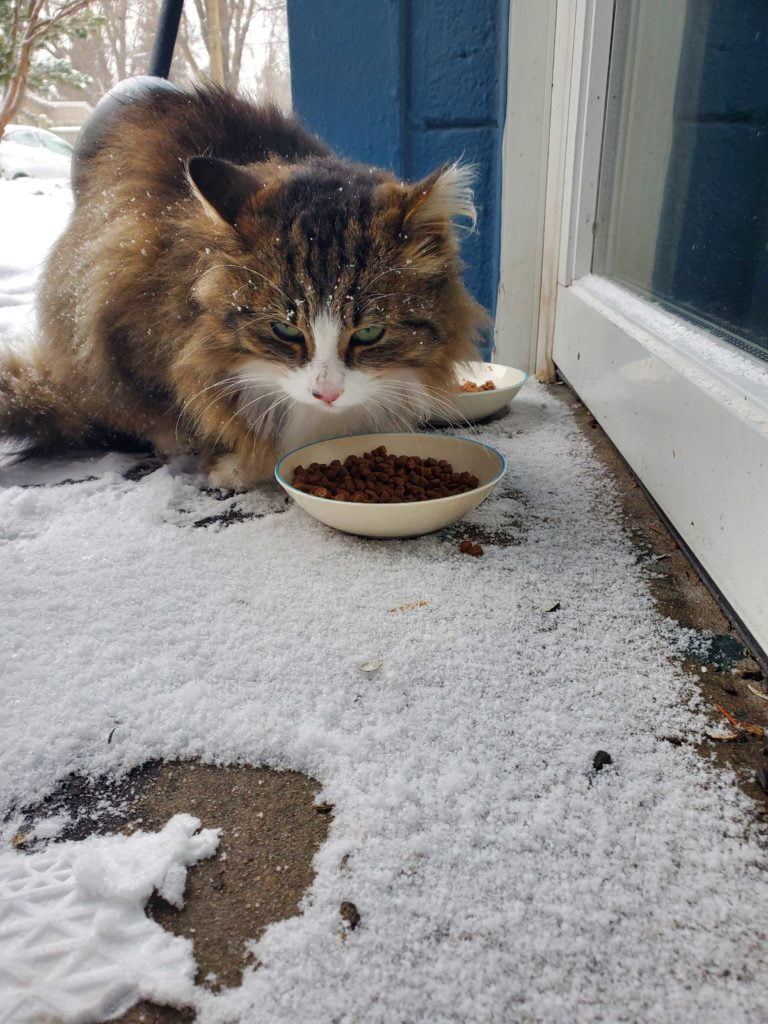 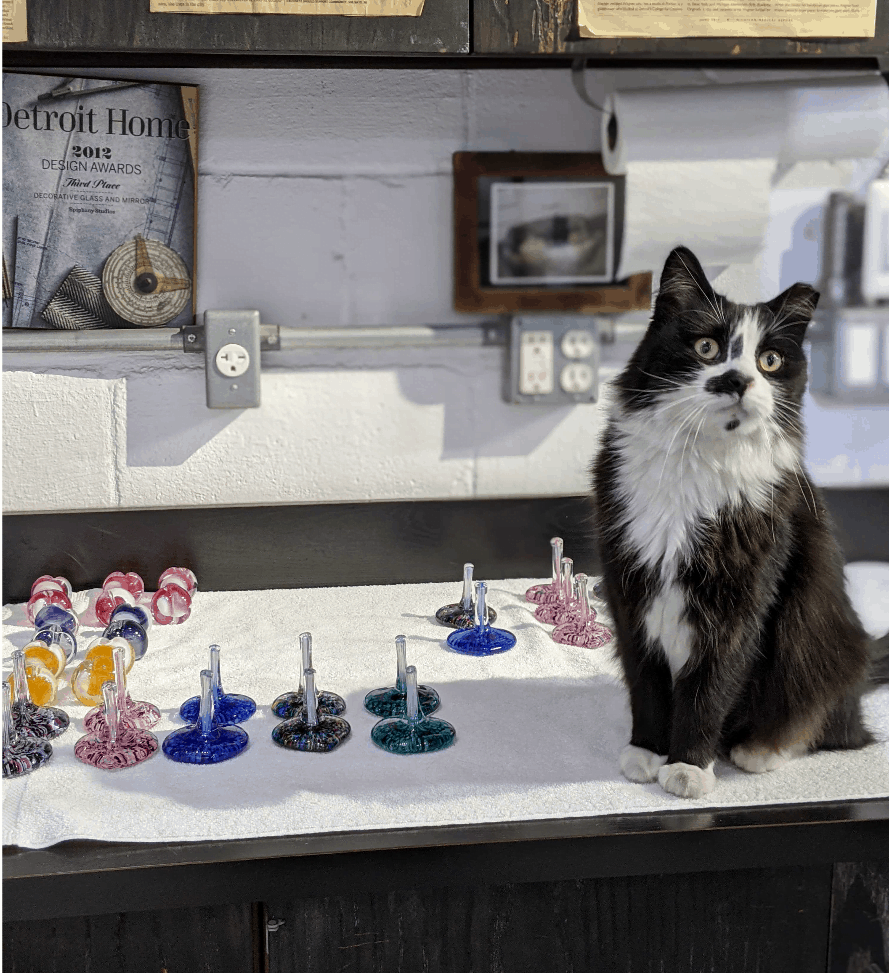 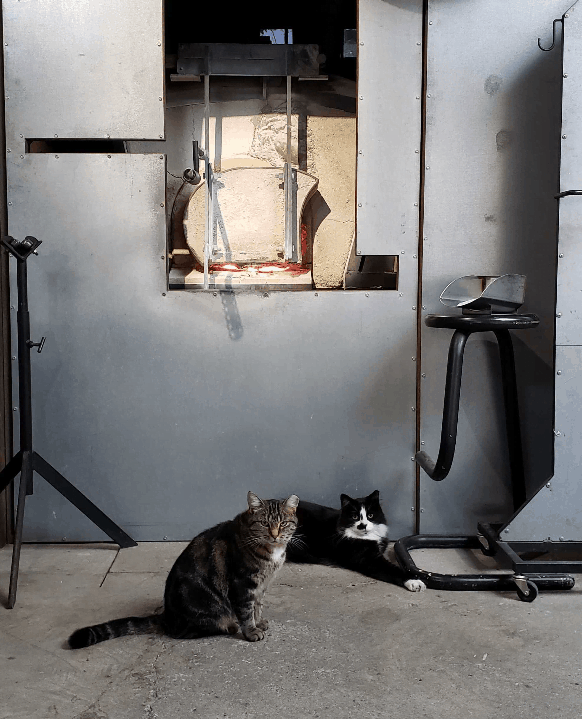 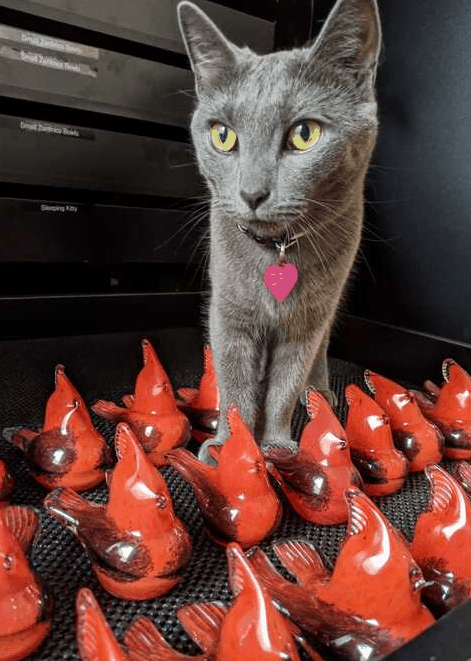 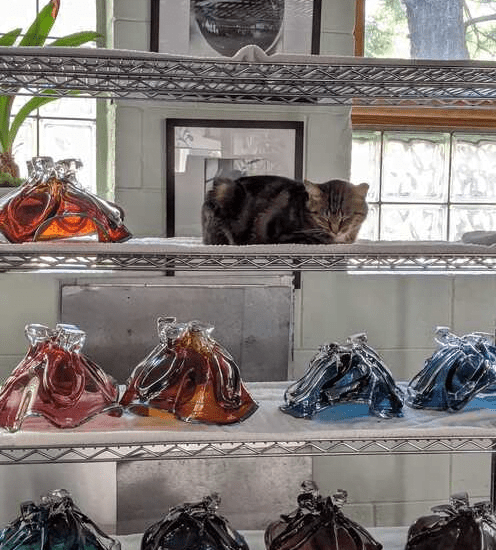