We love glass. Probably obvious to you since we constantly talk about our glass and how we make it. This week we wanted to talk about the History of Glass. Glass is a really amazing substance that has shaped the history of humankind.  We use glass in incredible ways for science, transportation, communication, and seeing. Seeing ourselves, seeing others, seeing into the stars and under the oceans.  Humans haven’t always understood glass but we’ve always been fascinated by it.  Its mysterious characteristics make it magical to work with and to behold.

This post gives a very brief overview of the discovery of glass, it’s uses through the ages and the future of glass. Humans, especially us, have a love affair with this amazing material. There is so much to know and learn about it! Let’s get started.

Glass is an extremely unique and interesting substance. It is unlike any other material known to humankind. Glass isn’t truly a liquid or a solid. It’s actually its own state of matter. This is due to its structure. The atoms are rigid like crystals, but more disorganized, similar to a liquid.

Because of the unique structure of glass, there is debate about whether it is a supercooled liquid or a solid. As stated before, glass isn’t a liquid or a solid- it is an amorphous solid, which falls between the two. This article gives more insight into this as well as why some consider glass a liquid.

Glass is created by heating up a mixture of dry materials. The three components in this mixture are former, flux and stabilizer. Former is the main component that makes up glass. It’s heated at an extremely high temperature and becomes viscous. Though different materials can be used, Silicon Dioxide, or silica, is the compound most commonly used as former. It gives glass its basic structure and characteristics. Other ingredients are added to silica. This changes its properties and makes it a more stable material. Flux helps the former melt at lower temperatures. Soda ash or potash are typically used. The final ingredient is the stabilizer, which keeps glass from dissolving, cracking or developing unwanted crystals. Calcium oxide in limestone is the most common stabilizer. The combination of these ingredients is called batch. It is heated in the furnace at about 2400 degrees Farenheit to become molten glass. 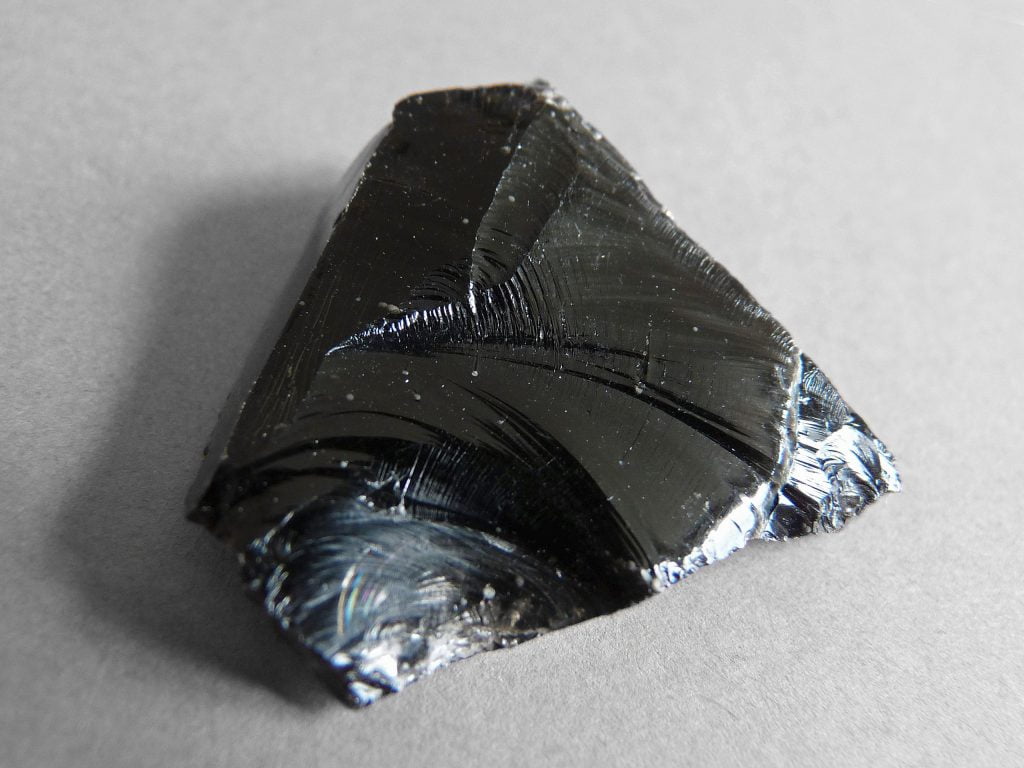 Since glass is created from heating up a mixture of these materials, it is actually a naturally occurring substance. A type of volcanic glass, called obsidian (shown left), forms when lava rapidly cools down and has minimal crystal growth. Prehistoric societies used obsidian to make tools, weapons, jewelry and money. Glass also comes from meteorites. Some meteorites release so much energy that the material it lands on is thrown into the air and goes into a molten state. This forms lumps of glass called tektites.

Furthermore, different ingredients can create different types of glass with different characteristics. Soda-lime glass, like we use in the studio, is the most common type of glass. It contains silica, sodium oxide, lime, magnesia and alumina. This is an inexpensive, chemically stable, hard and workable glass used for items like window panes and bottles.

In comparison, borosilicate glass consists of silica, boron trioxide, soda and alumina. This results in a glass that has a high resistance to changes in temperature and chemical corrosion. It is also more expensive than soda-lime glass. Borosilicate glass is used for items such as bakeware, car headlights and chemical glassware.

Now that we have an idea of what glass is, how did people figure out how to make it?

There are some romanticized stories that the discovery of glass occurred around 5000BC on the beaches of Syria. Merchants used their cargo to hold up cooking pots causing a mixture of soda-rich natron and sand to melt and create glass. These stories are not considered accurate because a cooking fire would probably not reach a temperature hot enough to melt glass. It is far more likely that glassmaking evolved from other crafts such as ceramics. Ceramics use glazes similar to glass, or metallurgy, which require separating metals from impurities called “slag” which contains materials that are used in the ingredients used to make glass.

Archaeologists have found manufactured glass in Egypt and Eastern Mesopotamia dating back to 3000BC. Glass vases dating back to 1500BC indicate the existence of a hollow glass industry. It is believed that the first glass was produced in Egypt. Glass industries developed likely independently in Egypt, Mycenae, China and North Tyrol around the same time. The first manual for glassmaking was found in the library of King Ashurbanipal of Assyria dating back to 650BC. The creation and use of glass was very slow and costly. Glass was a luxury. Society held glassmakers in high esteem since not everyone had the skills and knowledge to melt glass. Glass shops were typically in larger cities where royalty and aristocrats could support them. These trends changed when the revolutionary technique of glassblowing was discovered. 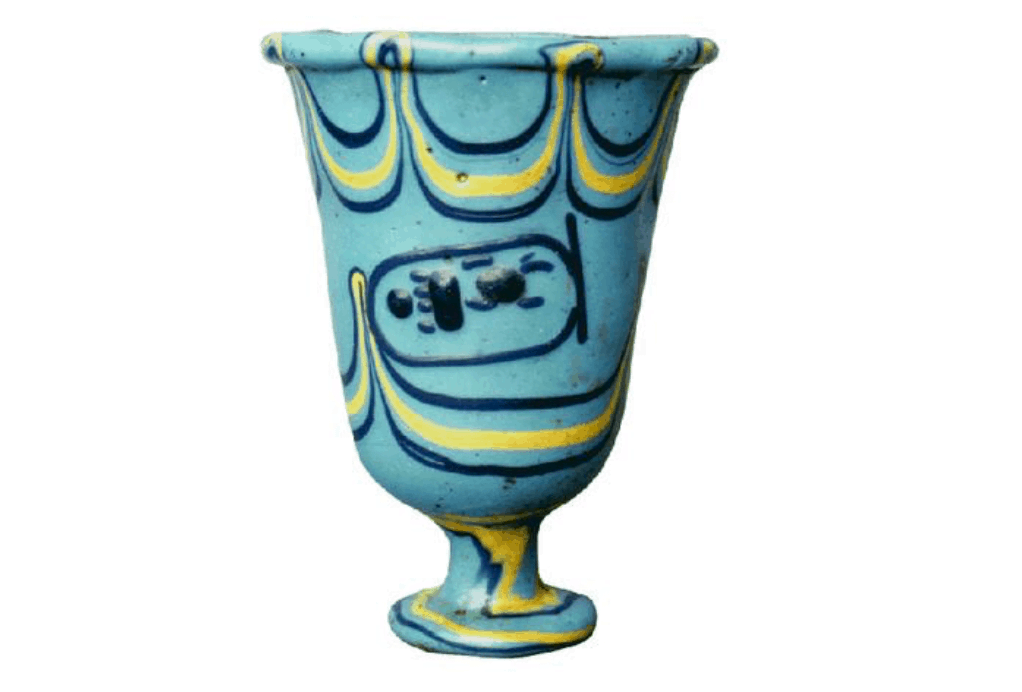 In the 1st century BC, the first blowpipe was created in Syria. This opened up a world of new possibilities for glass production and made it cheaper, faster and easier. Glass production expanded to the Roman Empire from Italy and glass workshops were located around the Empire. Glass production improved and many types of glass vessels and containers now had great variations in color and decoration. This also resulted in a division of glassmaking into the mass production of everyday utensils and the manufacturing of elite decorative objects. Decorative objects were distinguished not by the exclusivity of the material but by the exclusivity that came from the skill of the craftsman who created the piece. This encouraged craftsman to find new ways to set apart the form and functionality of their glass, leading to the creation of new techniques.

By 1000AD, Alexandria in Egypt was the most important center for glass manufacturing upon the discovery of clear glass. This led to the use of glass in architecture for the first time throughout the Roman Empire. Glass was also traded widely and openly accepted. This lead to glass losing its mystic and elite status. With the decline of the Roman Empire came the decline of glass and much of the knowledge of the craft disappeared from the West, with advanced techniques continuing only in the Byzantine Empire and the Middle East.

By the eleventh century, knowledge of glassmaking made its way back to Italy. Venice become a center of glassmaking. In 1271, Venice created the first legal regulations for glass-blowers. In 1277 an agreement between the Doge of Venice and the Prince of Anitoch aided the exchange of technology and raw materials and secrets of Syrian glass production made their way into Venice. A glassmakers’ guild was founded in 1292 and all glassblowers were banished to the island of Murano. The official reason was that there were so many workshops that there was a danger of fire. However, some stories claim it was to protect the secrets of glassmaking. Those who left or revealed those secrets were killed. It is unknown if there is truth to these rumors.

Glassmakers started making new types of glass such as cristallo (seen left), a totally clear, colorless glass. They also made lattimo, or milk glass, which has an opalescent look. They developed other techniques as well. Venice had a monopoly on the creation of large mirrors, giving the city prestige and an economic boost. During the Renaissance, the Venetian glass industry saw the same esteem the Roman industry held during the time of the Roman Empire.

Glass was once again viewed as mysterious and those who knew the secrets of it held economic power. The industry continued to expand and by the end of the sixteenth century the revived knowledge of glassmaking reached all of Europe and the Middle East. The fragile style of Venetian glass fell out of style. By the seventeenth century, the center of glass production move to Bohemia. Bohemian cut glass was much thicker and less fragile and found popularity along with enameled or painted glass. Around this time, North America developed its own glass production as well.

Glassmaking in America started in 1608 in Jamestown, VA. As a symbol of wealth, glass was not in most households. The first glass factories showed up in New York and New Jersey over a hundred years later, which saw the creation of more utilitarian glass products such as wine glasses, decanters, punch bowls, and candlesticks.

The Industrial Revolutions of the 1800s brought about further advances in the manufacturing of glass. Facetories manufactured synthetic glasses with improved properties. The creation of different types of glass required many different machines. In 1827 the glass pressing machine came into existance. It allwed for mass produced and inexpensive glassware. Other industrial processes, including float glass, cylinder blown sheet glass, and rolled plate glass, became popular. Machines created large sheets of glass, used for huge windows, like those that made up the Crystal Palace, the first building made of glass. 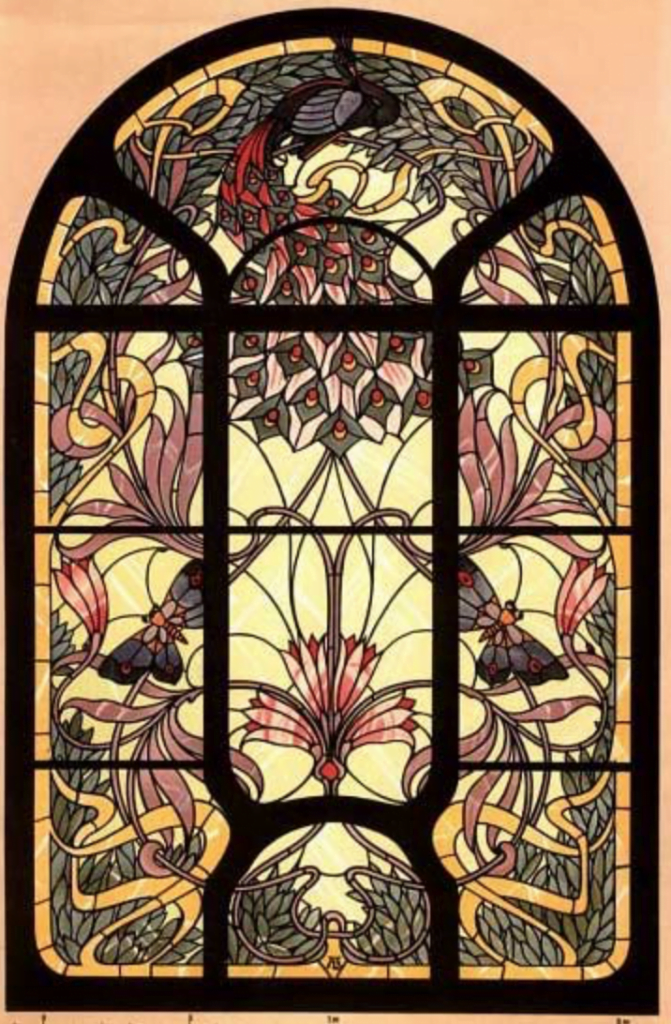 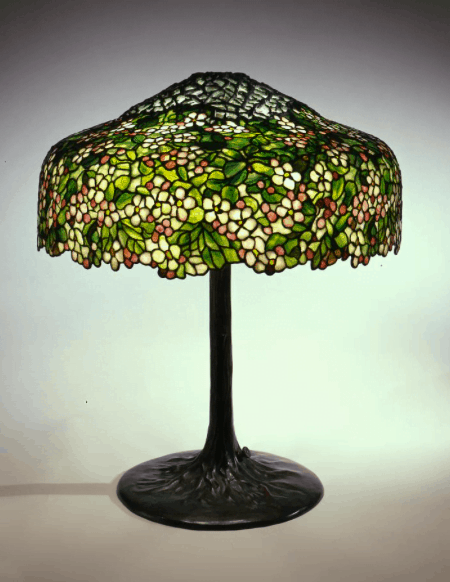 Despite the mass manufacturing of glass, it was also a decorative art. The nineteenth century Neo-Classical movement brought back cameos from the Romans. The Art Nouveau movement utilized a great deal of glass (far left). Louis Comfort Tiffany created his famous Tiffany glass (left). In the twentieth century, factories still made majority of glass. Some glass artists started to classify themselves as fine artists and the market for ‘art glass’ started to grow.

The 1960s brought a growing interest in art glass. Glass artists wanted society to consider their work as fine art. The United States saw a rise of glassblowers working out of their own studios with smaller furnaces. This movement spread to Europe, the UK, Australia and Asia. The artist was both the designer and maker of one-of-a-kind objects.

In 1962, Harvey Littleton spurred on a contemporary glassblowing movement, later referred to as the American Studio Glass Movement. This movement would generate some of the most important contemporary glass artists including Marvin Lipofsky, Sam Herman and Dale Chihuly. The rise in popularity of glass art also encouraged the creation of glass schools such as Philchuck Glass School, Pittsburgh Glass Center and the Corning Museum of Glass.

Today glass is so commonly used, we hardly think about how much we rely on it. Technology relies heavily on the utilization of glass and without advances in glass we wouldn’t have amazing technology like our smartphones or huge telescopes in space. Medical science is even figuring out ways to generate bone from glass. This article from The Atlantic give further insight into the many ways glass has been used throughout history and ways it will be used in the future. Glass is a truly remarkable substance that can be used in functional ways to improve our lives or to add beauty through decoration.

This post gives a quick overview of the evolution of glass throughout history. Below are some great resources for you to learn more. If you’d like to learn more about glassblowing, check out last week’s Glassblowing 101 post. Stay up-to-date with us on Instagram, Facebook or sign up for our newsletter. Thanks for reading, and stay healthy and safe!

FREE Shipping in our webstore!
Use code 'ARTGLASS' at checkout and select "Free Shipping"
Dismiss