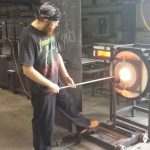 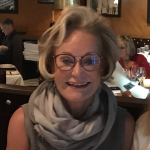 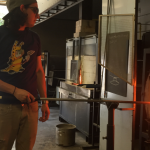 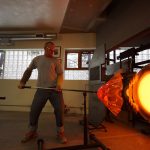 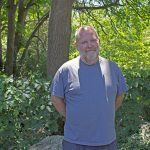 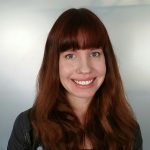 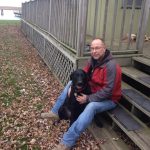 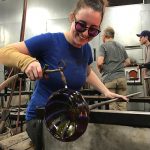 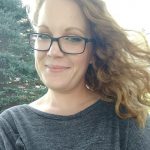 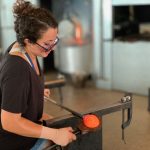 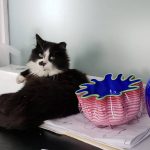 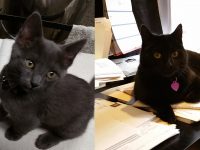 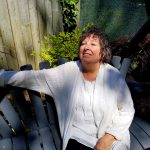 FREE Shipping on all US orders in our webstore!
Dismiss

Chris got his start in glass blowing when he first hopped on his friend’s Carlisle torch for fun 5 years ago. He instantly fell in love with the material and the endless possibilities it presented. His goal with glass is to find a way to incorporate his love of certain pop culture mediums (movies, video games, TV, heavy metal), into glass pieces.

Gretchen Ruff was born and raised in the western suburbs of Chicago. However, she has lived, raised a family and worked in the Detroit area for the last 50 years and is a proud supporter of the city. She was educated at the University of Wisconsin and Wayne State, graduating from Wayne with a double major in English Literature and Art History.

The first phase of her career was spent at the J.L.Hudson Co. where she rose from being a fashion model to the Director of Events and Publicity for the 27 Hudson stores. She had wonderful mentors including Fred Marx, Madeline Coe, and Brenda Rosenberg who helped her polish her skills as an event marketer.

When Hudson’s moved their marketing headquarters to Minneapolis, Gretchen shifted into the second phase of her career, joining DMBB, a GM Advertising agency, as the first event marketer to join an automotive account team in the history of automotive marketing. The experiment was a success. Eventually Gretchen would lead the integrative marketing teams, as a senior officer, for DMBB, BBDO (Chrysler) and Wunderman (Ford).

Gretchen retired from the agency business after 25 years and went into phase three of her career when she joined Saks Fifth Ave. as a personal shopper and brand ambassador for two designer fashion lines.  She retired from Saks one year after meeting her life partner, Dale Mclellan, in order to facilitate merging their two homes into one. Their home includes the varied art collections of each of them, including over 35 pieces of epiphany glass which Gretchen has collected over the last 25 years.

Gretchen has supported the development of April Wagner as an artist since April was attending CCS and takes particular joy in her ever growing reputation and success.

Jared Monchnik, BFA from College for Creative Studies, working with glass for its manipulative properties and the various ways he can use the material to create an immersive sense of wonder. He is continually exploring new glass-working techniques that alter the molten material to create semi-realistic creatures, often involving a torch, added glass bit work, carving, and mixed media surface applications.

Research and ideation has led Jared to focus on sculpture, drawing from historical sources like Renaissance sculpture (15th – 16th century) as well as astronomy and biological evolution. He is continually drawing inspiration from modern and contemporary artists like Martin Janecky, Raven Skyriver, and William “Bill” Morris.

Jared is currently creating an ever-evolving narrative in the form of dioramas with the use of sculpted glass creatures that accompanies a written short story.

Marc is a production glass craftsman, artist and owner of ‘The Juice Box’ glass studio located in Detroit. Marc works as an independent glass contractor at epiphany. Production work fuels his artwork encompassing traditional techniques and forms with a social and environmental context. Marc enjoys teaching and being active in the community. Throughout his twenty years in glass he has received scholarships to The Corning Museum of Glass and Pilchuck Glass School.  Marc’s work is published most recently in ‘Glass Art, 112 Contemporary Artists’ (Schifferbooks) and received ‘Best in Glass’, 2015 Royal Oak Clay and Glass.

Mike has been working for epiphany for over a decade. He consults and advises on general maintenance, studio operations, design installation, and transportation of custom projects. He is our resident handy man and jack of all trades. He also has a great laugh. Like, really great. Mike can do it all, and he spares no effort in assisting with the studio’s various needs.

Natalie is our Marketing & Sales Manager. She does all of our social media and blogging and also helps with events, the pop-up shop and day-to-day studio tasks. Natalie has a BA in Art History & International Studies from University of Michigan – Dearborn. She has spent the past few years working with various Detroit artists and musicians. When not working, Natalie enjoys photography, painting, and visiting galleries around Detroit.

Paul has been working for epiphany for over six years. He maintains the studio equipment, and creates and designs all of our custom metal work. He also advises on and assists with design, installation, and transportation of custom projects. Paul is an incredibly friendly and warm guy. He’s willing to lend a helping hand wherever and whenever we may need. We’re not sure what we’d do without him!

As an undergrad, she started working at a shop near campus that primarily sold locally made glass.  She immediately became submerged in a world of beautifully made and intricately colored glass.

It was there that she began to meet the artists behind the work she so admired.  She asked every Glassblower she met to work for trade in their shops, persuading them to let her clean, organize, or do anything necessary to convince them to begin training her in their craft.

Rebecca now has over four years of production hot shop experience.  She has taken an intensive six day study of sculpture, at Corning Museum of Glass, and worked with, and learned from many master glass blowers over the years.  She is an excellent assistant and aspiring gaffer, who dreams of one day opening her own shop.

Being Facilities Manager Mike’s daughter, Shannon has naturally become accustomed to taking care of business. Regardless of the task – organized completion is always the end goal. You can find her packing and shipping/delivering the delicate glass, lending a hand with any events, assisting in custom installations and cleaning the most intricate of sculptures.

Yazmin Dababneh is currently pursuing a degree in Glass at the College for Creative Studies in Detroit. She works with a variety of mediums, but most recently has been focused on experimenting with glass, steel and immersive installations. Dababneh was also accepted into The Guild of Artists and Artisans 2018-2019 Emerging Artist Program.

This handsome guy is Cat Jack White (he may or may not be related to the musician). He is part of our feral colony of kitties that live outside the studio. He warmed up to us and now has run of the studio! He can be found in the office sleeping on keyboards or the printer, hiding in the shipping room among the boxes, or watching the artists work in the studio. He’s a welcome addition and has already been completely spoiled. His favorite things are tuna and catnip. If you see him around, make sure to give him a scratch!

Shiva and Brahma are our resident Studio Cats, and they perform their non-existent duties admirably. We’re all cat lovers, and we’re always delighted when April brings these sweet baby angels into the studio. The cats assist with inspiration, motivation, cuddling, naps, squirrel hunting, and some occasional paperwork. They are both, objectively speaking, good kitties. I might even go so far as to say that they are VERY good kitties. I mean just look at those faces! Ugh.

Mary has been with epiphany for over 6 years. As Studio Manager, she is an invaluable asset. Mary brings years of experience to the table. She handles everything from accounting, client relationships, event planning, and more. Mary is also our resident mom, and we’d all be lost without her guidance and support. She’s a lifelong lover and patron of the arts and music. And she’s the first point of contact for anyone new to the studio.